Week 4: Opening Up For NHS Change Day & the UpGoer5

READ TO THE END FOR A FREE GIFT!!!

NHS Change Day
Last year a single tweet (not by me I hasten to add!) sparked an idea that led to 189,000 people making personal pledges to change something in to improve the NHS for patients.  This was the first NHS Change Day.  March 3rd 2014 is the second NHS Change Day where the aim is for over half a million pledges. Before it's official launch on March 3rd we are already over half way to this target.


Being Open With Patients
This year, as well as supporting pledges made by others, mypersonal pledge is about improving the openness and transparency of the NHS.  The NHS has a chequered track record on being open.  The National Patient Safety Agency originally published guidance in 2005 on communicating effectively with patients when things go wrong, under a headline of Being Open.  Since 2009 it has been it has been a key requirement of the NHS Litigation Authority, who provide insurance cover for all NHS Trusts, that they have well designed policies to help ensure they are open with patients and families when things go wrong (requirement 2.10 of the NHSLARisk Management Standards).

In April 2013 it became a contractual requirement for providers of NHS services to be open with patients and their families when they suffer serious harm through a contractual duty of candour (section SC35 in the StandardNHS Contract).  It was a recommendation of Sir Robert Francis’s report on the public inquiry into failings at Mid Staffordshire NHS Foundation Trust that there should be a statutory duty of candour.  The government, in theirresponse, said they will pass laws to introduce this.


NHS Board Transparency
The Professional StandardsAuthority Standards for members of NHS boards and Clinical Commissioning Group governingbodies in England require that board members, and therefore boards, are open.  It states:

“I will be open about the reasoning, reasons and processes underpinning my actions, transactions, communications, behaviours and decision-making and about any conflicts of interest”

In spite of all these guidance, requirements, contractual duties, standards and impending legislation, some parts of the NHS on some occasions are still not as open and transparent as we should be.  I deliberately say ‘we’ because I take personal responsibility for the actions or inactions within my power to change where we are not open in the best interest of patients and public.

This is why my NHS Change Day pledge is to challenge any lack of, or perceived lack of, transparency or openness that I come across.


Using Open Language
Another significant way in which the NHS can be less than transparent to patients and the public is in the language that we use.  During last night’s WeNursesTwitter Chat about ‘standardised languages’ part of the conversation turned to the jargon, abbreviations and acronyms that health professionals use on an all too frequent basis.

As a key part of my pledge, I aim to challenge others and reduce my own use of unexplained jargon, abbreviations and acronyms.  One conclusion from last night’s chat was that the use of jargon can alienate people, engaging with people in a language they understand is essential to build rapport and ensure they are not disempowered.  Nelson Mandela once said:

Sometimes not using complicated language can be difficult.  If you want to see in practice how hard this can be; try using the Up Goer 5 tool to explain any every day concept, object or idea.  It will only let you use the most often used ten hundred words.  This idea came from a challenge to explain the Saturn V rocket in simple terms.  An explanation of the story is here.

Finally, my gift to you…


Jargon, Abbreviations and Acronyms
In my time working in the NHS I have documented any abbreviation, jargon or acronym that I have come across.  It may or may not be hard to believe, but my list now stands at more than 18,800!  My gift to you is to give you access to this list so if you come across any jargon you may find it in my list.  Please do tell me if there are any you know of that I’ve missed from my list and I’d be happy to update it.  This link will take you to a PDF searchable version of this file (the link takes you to a file sharing site called FileSnack where you can download the abbreviations list without any need  for sign-up or login; it’s 1.5MB in size)

I wrote previously about CQUINs (pronounced: ‘see-kwin’) on Day 38 of my 100 day blog, but this post really is about sequins (partly)!  Watching the Winter Olympic Ice Dance with my wife, brother-in-law and sister-in-law we were a little perplexed by the scoring system.  A simple question arising of: “what’s the maximum possible score” led to furious Googling and unsuccessful efforts to find a straight answer to this seemingly simple question.  With no assistance offered by the commentators and not to be defeated, I eventually found the International Skating Union website and their “Special Regulations & Technical Rules: Single & Pair Skating And Ice Dance 2012”.  Buried deep within multiple sections of this 169 page document it states that there are nine judges on an Olympic judging panel and each may award up to 10 points; therefore, a maximum total score of 90 is available for the short programme.

Through searching for the answer to a relatively simple question, I came across a cloud of technical detail and complexity.  This reminded me of the NHS Standard Contract.  For which annual negotiations with providers are currently in full swing.  Although we already have providers in place for the services we are responsible for, there is an annual process of agreeing some significant elements to reflect changes in our local requirements and nationally mandated priorities.  The full technical requirements are within the NHS Standard Contract, which itself runs to 210 pages in template form.

Annual negotiations centre on the detail of what is important to local people who use the services and any particular issues that may have arisen in the last year not specified previously and which require specifying in the contract.  This all adds up to a lot of complexity and much debate over the detail between commissioners and providers.  Where more than one commissioner or provider is involved this can get even more complicated.  What is missing from this process is an explicit application of values to underpin decisions.

I fully understand that within the NHS ‘internal market’ between commissioners and providers and for many legal reasons, a lot of the technical detail is necessary.  I also understand that this is borne out of how the ‘system’ has been set up and how regulators, such as Monitor and NHS England require the process to take place.

It’s probably too late in the process for this year’s annual contract negotiation process between commissioners and providers, but in future years, it should be possible for us to start by establishing shared values for use throughout negotiations.  The intention being not to have a big stick to beat each other with, but a simple reminder of why we’re doing it before we get too lost in the technical detail.  This is important as an important element of making change across organisational boundaries is to ensure a shared vision and common set of values.

Finally, it is worth noting that rule 353.1.m.ii of the ISU Special Regulations & Technical Rules states: a deduction up to -1.0 point may be made if part of the costume/decoration (including sequins) falls on the ice. 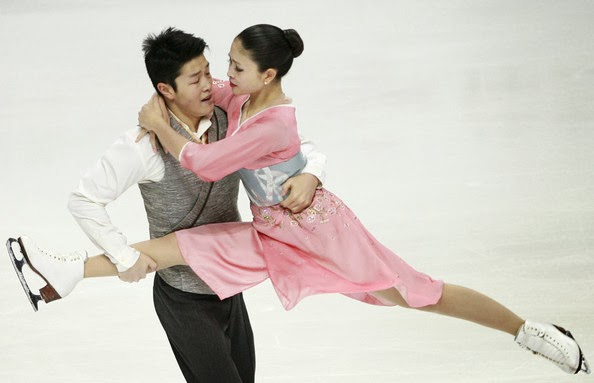 I wrote about this tweet on day 96 of my 100-day blog.  The response I got and subsequent conversation on twitter is summarised here, produced brilliantly by Clare Helm.

The response, whilst containing great examples of health service providers using social media for patient benefit, wasn’t full of a huge amount of similar examples by commissioners.  There was however a need identified for more support for commissioners in this area.  Following this Clare Helm had the idea that we could set up an online community through Twitter for commissioners to share ideas and spread good practise.  From there @WeComissioners was born.

As part of the WeNurses family, there will be WeCommissioners Twitter chats every two to three weeks.  I’ll be supporting running this with, amongst others the wonderful Clare Helm, who works at NHS England supporting CCG development (although WeCommissioners isn’t formally part of her day-job).

Our first live Twitter chat is 8-9pm 11 February.  Do join us; there’s helpful info on how to join a Twitter Chat here.

For this first @WeCommissioners chat we want to talk about collaboration in commissioning.  We intend on this chat being open to discuss any element of collaboration that is of interest and value to you.

Commissioning has emerged as an increasingly important driver of quality, efficiency and outcomes for patients in the past 10 years.  Commissioning put simply is how we plan, agree and monitor services; including procurement where this is needed as part of the process.  Due to the complex nature of health and social care services, this is much more complicated in reality.  This can include a number of inter-related activities ranging from assessing the needs of a specified population, through the clinically based design of patient pathways, to development and agreement of detailed service specification and contract negotiation or procurement, which is subject to continuous quality assessment (taken from commissioning information on the NHS England website).

To get the best outcomes for patients, to ensure services are safe, effective, provide a valued experience and to ensure the most effective use of public money, commissioners must collaborate.  The, now not-so-new, NHS structure means that different organisations need to collaborate to achieve shared goals and to best safeguard the public.  Achievement of the aspirations for patients and the public described in the respective outcomes frameworks for the NHS, Social Care and Public Health require significant collaboration between organisations locally, regionally and nationally.

Before the chat, it might be helpful start to think about the following questions:


Some further background reading that may be of interest prior to the chat: